Definition of
The Colorado Plateau

Definition of The Colorado Plateau

The Colorado Plateau contains seven regions;  The High Plateaus of Utah, The Uinta Basin, Canyon Lands, The Navajo Section, The Grand Canyon Section, The Datil Section and the Acoma-Zuni Section.  The Acoma-Zuni Section is a new division that is comprised by lands taken from The Datil Section.  All of the regions are located within the boundaries of four states; Arizona, Colorado, New Mexico and Utah.   Monument Valley is the approximate center of the The Colorado Plateau.

The Colorado Plateau's landmass is one of the oldest generally intact tectonic plates on the planet.  Although this region has been uplifted several thousand feet, it has avoided the massive uplifting to the east characterized by the Rocky Mountain System and to the west by the Basin and Range Province.  Geologists believe that the earths crust is thicker under the The Colorado Plateau.  This thicker crust protects the area from the typical geologic mountain building that has occurred in the American west.  The geologic movement that does occur is exposed as linear bands like The Vermillion Cliffs and tilted plates like Capitol Reef.  The mountain ranges on the plateau are typically volcanic or of volcanic origin.  The San Francisco Peaks near Flagstaff, Arizona are primarily volcanic in origin but the Henry Mountains near Hanksville, Utah and the La Sals and Abajo's near Moab, Utah are laccoliths.  A laccolith is a mountain range formed by the uplift from volcanic pressure that could not quite break through to the surface.

One element that the plateau has not escaped is erosion.  In fact when you combine the erosive power of water, a fairly stable landmass and a few hundred million years you create the most unique sculpture park in the world.  Simply put, there is nothing on the planet, on any continent, like The Colorado Plateau.

The following is a general description of the boundaries of
The Colorado Plateau subdivision:

The northern boundary is the southern flank of the Uinta Mountains extending from approximately Utah Lake near Provo to Dinosaur National Monument near Vernal, Utah.

The eastern boundary is the most complex as is descends southeast from Dinosaur National Monument toward Glenwood Springs, Colorado and curves southwest around the San Juan Mountain Range, then angles southeast to Albuquerque, New Mexico.

The southern boundary is represented by a geologic formation known as The Mogollon Rim (pronounced - muggy-one) near Payson, Arizona.  The southern boundary runs generally east-west forming a convex curve that extends from the Nevada Border at Lake Mead Reservoir southeast to Payson, following the Mogollon Rim, and then sweeping northeast toward Albuquerque, New Mexico.

The western boundary is Interstate I -15 as it runs northeast from The Virgin River Canyon near the Nevada Border and St. George, Utah  to Utah Lake near Provo, Utah. 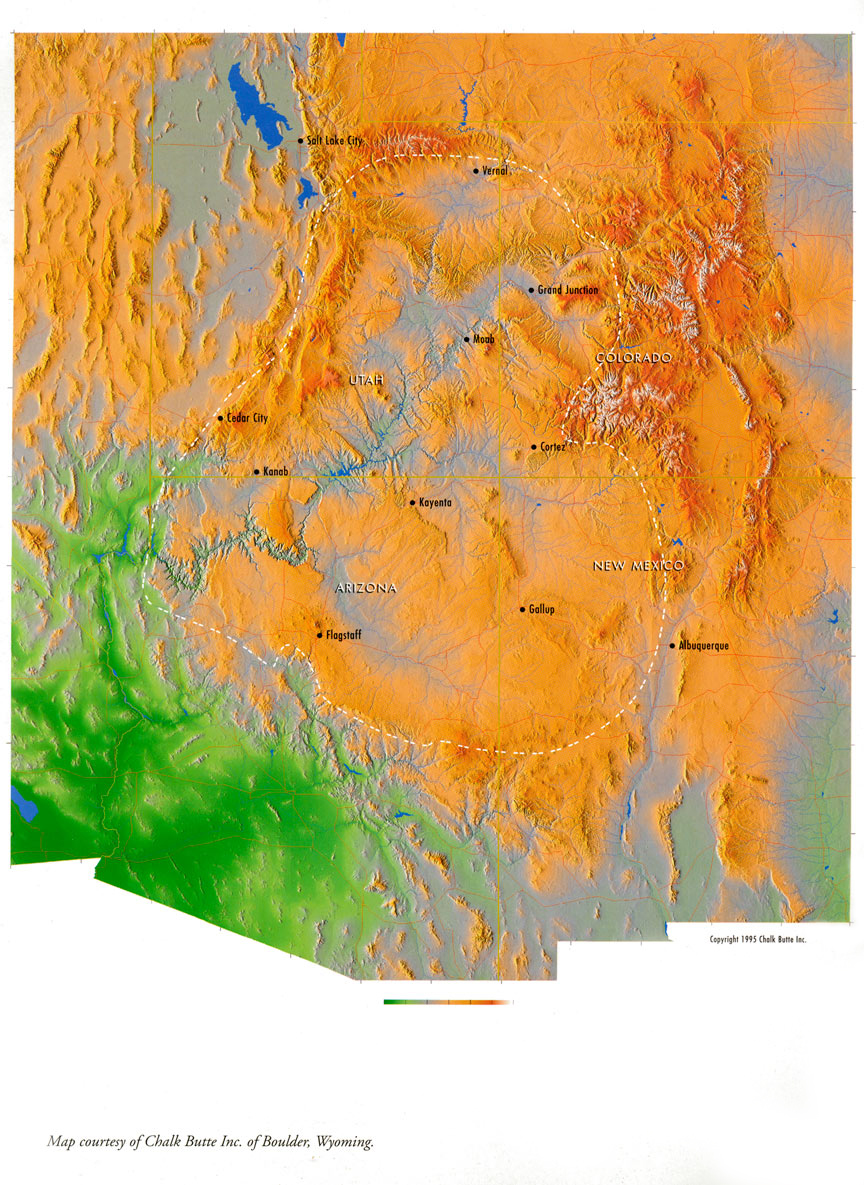 Map of The Colorado Plateau